What Prince should have done with his Estate

Few artists are as determined to control the rights to their creative work as Prince was, making the fact that he apparently died without a will astonishing. An estate plan would have appointed his heirs and given clear directions about the use of his music and real estate, and avoided the uncertainty that now surrounds the management of his massive, multi-million-dollar estate. As the situation continues to unfold, music attorney Daniel K. Stuart outlines some basic steps that artists, songwriters and performers can take to protect their assets and would-be heirs from suffering a similar fate.

1. Hire a Good Trusts and Estates Lawyer — and a Good Music Attorney. They can work together to integrate entertainment assets into an estate plan. Neither will be cheap, but the money will be well spent. For larger estates, a tax attorney is also recommended.

2. Create a Last Will and Testament. This instrument appoints the executor of the estate, names childrens’ guardians and outlines how assets will be divided (to the extent that distribution is not otherwise governed by a living trust). Be sure to designate alternates in case the appointed trustee or executor dies, becomes incapacitated or declines to accept the role’s responsibilities.

3. Consider a Living Trust. This instrument provides for a trustee to hold the legal possession of assets to manage and ultimately distribute them. (A living trust may not be necessary for a married person without children who isn’t yet wealthy.) Also, explore using a “No Contest” clause in the Will or Living Trust. This device essentially disqualifies any heirs from receiving assets if they contest the Will or Living Trust and, where enforceable, can be an effective deterrent against a rogue heir interfering with a carefully constructed estate plan.

4. Create an Advanced Health Directive and a Durable Power of Attorney. The former document provides health care instructions in the event a person becomes incapacitated. (Otherwise, such instructions will be determined by relatives or by doctors.) The latter document appoints a trusted person to make health care and financial decisions in the event of the person’s incapacitation.

5. Manage Your Bank Accounts and Insurance Policies. Make sure that all beneficiary forms for retirement accounts and insurance policies are in order. Investment and bank accounts may require a “POD” (payable on death) or “TOD” (transfer on death) form to make sure heirs get access to money upon the account holder’s death.

6. Appraise Intellectual Property Assets. Catalogs of copyrighted compositions, sound recordings and celebrity name, likeness rights and other intellectual property can have considerable value so it is helpful to have that value appraised and updated from time to time.

7. Create an Information Outline. The trustee and/or executor will need to know where to find important documents as well as account numbers and contact information (and logins and passwords) for such items as insurance policies, bank accounts, investment accounts, safe deposit boxes, smartphones, tablets and computers. All of this information should be collected in one integrated document and held by the trusts and estates lawyer.

by Daniel K. Stuart is a partner with King, Holmes, Paterno & Soriano in Los Angeles. Published on Billboard Magazine’s website 8/8/2016.

Billboard has served the entertainment business since 1894. Beginning as a weekly for the billposting and advertising business, Billboard and its popular music charts have evolved into the primary source of information on trends and innovation in music, serving music fans, artists, top executives, tour promoters, publishers, radio programmers, lawyers, retailers, digital entrepreneurs and many others.

Is crowdfunding changing the world?  Apparently it is making a difference.  A new study from the University of Pennsylvania has found that crowdfunding site Kickstarter has created over 8,800 companies since launching, and with it 29,600 full-time jobs and 283,000 part-time ones. Professor Ethan Mollick examined 61,654 successful Kickstarter projects from 2009 thru 2015 and found that the site has generated $5.3 billion for creators and their communities.

“Successful crowdfunding projects have implications that go beyond the interactions of the backers and creators who participate in projects,” Mollick writes. “Crowdfunding campaigns lead to new organizations that ultimately generate billions in non-crowdfunding revenue and have hired thousands of employees.”

According to Mollick’s research, two- thirds of Kickstarter projects were created by individuals, with the rest coming from teams of mostly friends. A plurality of creators were between ages 25-34, though the average is 38, with 41 percent of the creators being female.

“While it is not possible in this study to compare the e ciency of crowdfunding to other methods of encouraging entrepreneurship or subsidizing creative work, it is clear that, overall, the money raised from campaigns leads to positive returns across a variety of measures,” Mollick concluded.

The tragic death of the incredible artist known as Prince marks the end of a extraordinary music career.  Prince was a virtuoso on any number of instruments, a master arranger and producer.  Prince’s music was as diverse and versatile as his elaborate outfits.

His pursuit of complete artistic freedom – and legal protections for that freedom – will likely be his legacy.  His confrontations with record companies, streaming services and social media users inspired other artists to both demand artistic freedom and earn their fair share of profits.

Prince was a Musical Genius at 19

In 1978, when Price was 19 years old, He signed with Warner Bros. and released his debut album, “For You.”  Prince is credited with playing every instrument and singing all of the vocals on the album.

Albums of this period typically relied on an army of producers, arrangers, composers and musicians. Michael Jackson’s album “Off the Wall” (1979), for example, credits nearly 40 session musicians and over 15 composers and arrangers. While it wasn’t a major success, “For You” revealed Prince’s budding genius and his desire to exert control over all elements of his work, allowing him to stay true to his artistic vision.

“For You” was the first in a long line of studio albums that Prince produced with Warner Bros. After the release of two other developmental efforts, he released “1999” (1983) and “Purple Rain” (1984), which established the showman as one of the most unique, diverse and dominant pop artists of the 1980s.

However, by the early 1990s, the relationship between Prince and Warner Bros. began to cool. After the success of “Diamonds and Pearls” (1991), Prince signed a six-album, US$100 million contract with the record company.

But the details of the contract led to a prolonged legal and creative battle concerning ownership of Prince’s entire Warner Bros. catalog. Under the contract, Warner Bros. received ownership of Prince’s body of work that he had produced for the company. For his part, Prince received a sudden influx of cash to continue working on recording projects at his Paisley Park Records studio in Minnesota.

As Prince grew increasingly frustrated that he had surrendered the rights to his music, the artist began to rebel by publicly appearing with “Slave” written on his cheek. 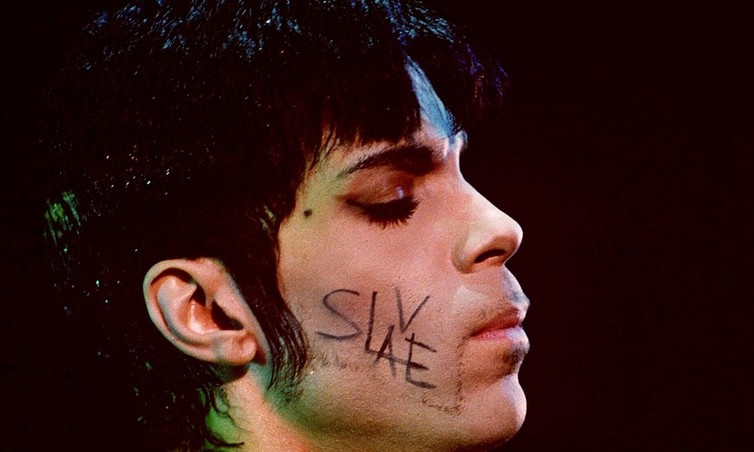 Prince with the words SLAVE written on his face.

Prince changed his name to a symbol,

which occurred after the artist

declared his former artistic self dead.

To meet the recording demands of the contract – which dictated that Prince needed to produce new albums under the Warner Bros. name – he opted to release prerecorded music to Warner Bros. His final release from this period, “Chaos and Disorder” (1996), is a hodgepodge of hastily written songs that serve as a tongue-in-cheek rebuke to Warner Bros., while allowing the artist to fulfill his obligations to the company.

Fighting for his rights

Given Prince’s public, prolonged dispute with Warner Bros., the damage may have seemed irreparable. However, the two sides renewed their working relationship in 2014, a move that restored Prince’s ownership of his earlier Warner Bros. releases.

Prince spent the last decade of his life fighting other areas of the music industry to ensure that his creative works were protected. In 2007, Prince and Universal Music sued a mother after she posted a video of her son dancing to a Prince song on YouTube.

Then, in 2014, the artist filed suit against 20 people who he claimed violated his copyright protections by either posting his songs online or by participating in file sharing services that posted his music. The complaint sought $1 million in damages from each person.

Prince’s lawsuits were meant more to draw attention to issues of copyright infringement than they were to ruin the finances of mothers and kids sharing files on the Internet. After those accused of violating copyright in the cases mentioned ceased their activity, Prince dropped the cases.

More recently, Prince, along with other artists such as Taylor Swift, began demanding that online retailers and streaming services pay better royalties to the artists whose music they play. In 2015, Prince pulled his music from most online vendors, opting to deal exclusively with Jay Z’s service, TIDAL.

Prince’s fight to protect his creative voice has reverberated to the most remote corners of the music world. Choral arrangers – who typically pay a license fee in order to access rights that they then arrange for choral groups – are barred from using the artist’s music as material.

Prince’s legacy as a brilliant and extraordinarily unique musician will endure in the nearly 30 studio albums that he produced.

But the artist should also be remembered for his work as an advocate for protecting the creative property of musicians and their music. Throughout his career, Prince’s willingness to engage in ownership battles over creative rights played a major role in the growing wave of discontent toward the music industry, now led by Jay Z, David Byrne and Neil Young, among others.

Just as “For You” displayed an artist in total control of his medium, Prince’s battle to maintain control over his music throughout his career will ensure that the legacy he leaves is in the exact voice that he intended.